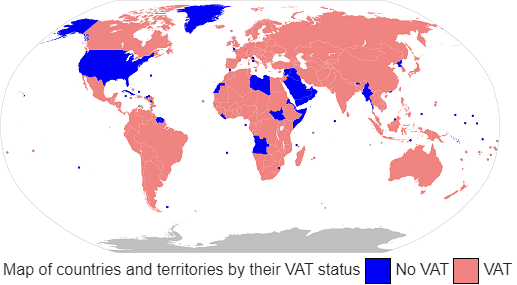 A value-added tax (VAT), known in some countries as a goods and services tax (GST), is a type of tax that is assessed incrementally. It is levied on the price of a product or service at each stage of production, distribution or sale to the end consumer, except where a business is the end consumer which will reclaim this input value. It is similar to and is often compared to a sales tax.

VAT essentially compensates for the shared service and infrastructure provided in a certain locality by a state and funded by its taxpayers that were used in the elaboration of that product or service. Not all localities require VAT to be charged and exports are often exempt. VAT is usually implemented as a destination-based tax, where the tax rate is based on the location of the consumer and applied to the sales price. The terms VAT, GST, and the more general consumption tax are sometimes used interchangeably. VAT raises about a fifth of total tax revenues both worldwide and among the members of the Organisation for Economic Co-operation and Development (OECD). As of 2018, 166 of the 193 countries with full UN membership employ a VAT, including all OECD members except the United States, where many states use a sales tax system instead.

There are two main methods of calculating VAT: the credit-invoice or invoice-based method, and the subtraction or accounts-based method. Using the credit-invoice method, sales transactions are taxed, with the customer informed of the VAT on the transaction, and businesses may receive a credit for VAT paid on input materials and services. The credit-invoice method is the most widely employed method, used by all national VATs except for Japan. Using the subtraction method, at the end of a reporting period, a business calculates the value of all taxable sales then subtracts the sum of all taxable purchases and the VAT rate is applied to the difference. The subtraction method VAT is currently only used by Japan, although subtraction method VATs, often using the name "flat tax", have been part of many recent tax reform proposals by US politicians. With both methods, there are exceptions in the calculation method for certain goods and transactions, created for either pragmatic collection reasons or to counter tax fraud and evasion.

In a tax system, the tax rate is the ratio (usually expressed as a percentage) at which a business or person is taxed. There are several methods used to present a tax rate: statutory, average, marginal, and effective. These rates can also be presented using different definitions applied to a tax base: inclusive and exclusive.

Germany and France were the first countries to implement VAT, doing so in the form of a general consumption tax during World War I. The modern variation of VAT was first implemented by France in 1954 in Ivory Coast (Côte d'Ivoire) colony. Recognizing the experiment as successful, the French introduced it in 1958. Maurice Lauré, Joint Director of the France Tax Authority, the Direction Générale des Impôts implemented the VAT on 10 April 1954, although German industrialist Dr. Wilhelm von Siemens proposed the concept in 1918. Initially directed at large businesses, it was extended over time to include all business sectors. In France, it is the most important source of state finance, accounting for nearly 50% of state revenues.

A 2017 study found that the adoption of VAT is strongly linked to countries with corporatist institutions.

The amount of VAT is decided by the state as percentage of the end-market price. As its name suggests, value-added tax is designed to tax only the value added by a business on top of the services and goods it can purchase from the market.

To understand what this means, consider a production process (e.g., take-away coffee starting from coffee beans) where products get successively more valuable at each stage of the process. When an end-consumer makes a purchase, they are not only paying for the VAT for the product at hand (e.g., a cup of coffee), but in effect, the VAT for the entire production process (e.g., the purchase of the coffee beans, their transportation, processing, cultivation, etc.), since VAT is always included in the prices.

The value-added effect is achieved by prohibiting end-consumers from recovering VAT on purchases, but permitting businesses to do so. The VAT collected by the state is computed as the difference between the VAT of sales earnings and the VAT of those goods and services upon which the product depends. The difference is the tax due to the value added by the business. In this way, the total tax levied at each stage in the economic chain of supply is a constant fraction.

The standard way to implement a value-added tax involves assuming a business owes some fraction on the price of the product minus all taxes previously paid on the good.

By the method of collection, VAT can be accounts-based or invoice-based. Under the invoice method of collection, each seller charges VAT rate on his output and passes the buyer a special invoice that indicates the amount of tax charged. Buyers who are subject to VAT on their own sales (output tax) consider the tax on the purchase invoices as input tax and can deduct the sum from their own VAT liability. The difference between output tax and input tax is paid to the government (or a refund is claimed, in the case of negative liability). Under the accounts based method, no such specific invoices are used. Instead, the tax is calculated on the value added, measured as a difference between revenues and allowable purchases. Most countries today use the invoice method, the only exception being Japan, which uses the accounts method.